Fitzy's Focus: A Plus Tard 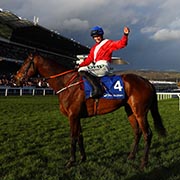 “The one thing I cannot say enough about is horses with previous Festival form at Cheltenham. If you have to tossup between two horses if you go with the one with the best Cheltenham form, then nine times out of ten you will be proved right.

“A Plus Tard qualified in spades when winning the Close Brothers Novices' Handicap Chase in 2019 when he won by 16 lengths in what is traditional one of the most competitive handicaps at the big meeting.

“He may have been well-handicapped but this season he had already won a Grade 1 Chase at Leopardstown over Christmas when beating Chacun Pour Soiand that horse was the beneficiary of his absence in the Grade 1 Dublin Chase on Sunday when beating Min in good style.

“Chacun Pour Soi is now just behind Defi Du Seuil in the betting for the Queen Mother Champion Chase and if the ground were to come up soft then they might let this horse take his chance in the Champion Chase.

“At the moment the Ryanair is his target and I think A Plus Tard will take a lot of beating. He would be my nap of the meeting and at odds of 9/2 he looks well worth a bet.”

Weak Spot
“I haven’t seen it yet.”