The 2019 Champion Bumper fourth heads to the Supreme with top-class novice hurdling form. 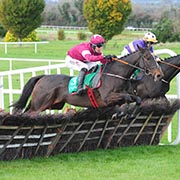 “In the Supreme Novices’ Hurdle, I very much like the look of the Gordon Elliott-trained ABACADABRAS. This horse is a very strong traveller and he has Cheltenham Festival form, as he was fourth to Envoi Allen in last year’s Champion Bumper.

The Supreme looks tailormade for him and he handles soft ground and good ground and there are a lot of reasons to like him. He’s a good jumper and the way he travels and the way the race is going to be run will really suit him.

He only finished a length and a half behind Envoi Allen in the Royal Bond at Fairyhouse and that horse looks like he is going to run in the Ballymore Novices’ Hurdle. If that is the case, then I would want to be with Abacadabras.

When this horse was second to Envoi Allen in the Royal Bond, the third that day was Darver Star and he enhanced the form in no uncertain manner when beaten only half a length by Honeysuckle in the Irish Champion Hurdle at Leopardstown on Saturday.

That looks extremely strong form and at 6-1, Abacadabras is a very good value bet.”

Strong Suit
“Already proven at the Cheltenham Festival with a very strong fourth in the Champion Bumper.”

Weak Spot
“If Envoi Allen was to turn up for the Supreme Novices’ Hurdle, then we may struggle to beat him.”