The record-breaking superstar got back on track with a win in the Game Spirit Chase. 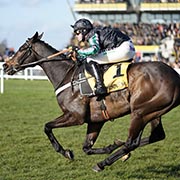 “ALTIOR is a horse that has won 20 out his last 21 races and when you think about that it is mind-blowing really.

In the Game Spirit at Newbury on Saturday, we saw that trademark flat spot and then that finishing kick and he finished the race off well. He should have done that as none of those in opposition are in the first couple of lines in the betting for the Champion Chase, so he did what he had to do.

He is still the reigning Champion and the Nicky Henderson team think he will be better and sharper for that run. He has been there and done that and has four t-shirts which say, 'I won at the Cheltenham Festival'.”

Strong Suit
“He is a four-times a Cheltenham Festival winner.”

Weak Spot
“There are two new kids on the block in Defi Du Seuiland Chacun Pour Soi but I still think he will win.”