Hugely impressive at the Dublin Racing Festival, there looks a touch of star quality about the Champion Bumper favourite. 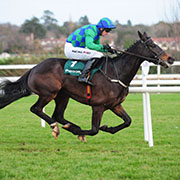 “APPRECIATE IT look to have all the attributes to give Willie Mullins yet another Champion Bumper success.

He won the Grade 2 bumper at Leopardstown last Saturday and it was the same race won by Envoi Allen prior to the Festival last year, so it’s a pretty good yardstick.

This horse travelled unbelievably strongly and bolted up from one of Joseph O’Brien’s that had won his bumper in similar style previously.

He is clearly improving in leaps and bounds and the manner of his victory suggests it is going to take something special to lower his colours.”

Strong Suit
“His form is very strong and he is following a similar pattern to Envoi Allen. He also comes from the all-conquering Willie Mullins team and looks a bit of a monster.”

Weak Spot
“He was beaten first time out when he was very keen and that’s the only concern with him. If he blows his top at Cheltenham that could be costly, and you just don’t know.”