Mick Fitzgerald suggests this experienced performer will play a big part in the Fred Winter. 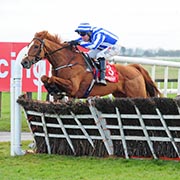 "Joseph O’Brien won the Boodles Juvenile Handicap Hurdle last year with Band Of Outlaws and I believe he has every chance of repeating the act with CERBERUS.

I love the way this horse travels in his race and I was really taken with him when he was second to Allmankind at Chepstow as the winner had the run of the race. Cerberus looked as if he pulled up in front when running at Leopardstown last time and I think he can be marked up on that.

The race on Wednesday is run on the Old Course, putting an emphasis on speed and this fellow is definitely a player in this race.

The weights come out next week and we won’t know his rating until then but he would definitely be one I would be looking out for, coming from such a shrewd and successful operation."

Strong Suit
“He is such a strong traveller and an ideal type for the race.”

Weak Spot
“We don’t know what mark he has yet.”