An eyecatching second in the Betfair Hurdle, Mick Fitz profiles a big player in the County Hurdle. 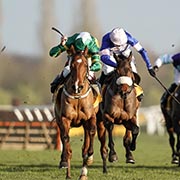 ”The Randox Health County Handicap Hurdle is one of the hardest races of the week to win but the horse that has to count himself very unlucky this season is Ciel De Neige.

He was beaten only three quarters of a length by Pic D’Orhy in the Betfair Hurdle at Newbury and you would have to say he was unlucky not to win.

The way the race was run didn’t suit him and he already has excellent Festival form having finished third to Band of Outlaws in the Boodles Juvenile Handicap Hurdle 12 months ago.

He would not be winning out of turn and he shouldn’t go up much for his run in the Betfair. I think he should still be well handicapped in the County Hurdle and he is 10-1 at the moment which looks a good price. “

Strong Suit
“Unlucky loser in the Betfair Hurdle and has good Festival form.”

Weak Spot
“It is one of the most competitive races at the Festival.”

mid-division, headway after 2 out, driven and weakened before last

Arena tracks could play key roles in resumption of racing