The 2019 Champion Bumper hero has scored twiced in Grade 1 company over hurdles this term. 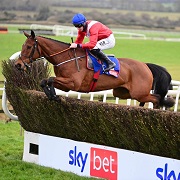 "I spoke to Gordon Elliott live on Sky Sports Racing and asked him which race ENVOI ALLEN is going to run in at the Cheltenham Festival and he said to me jokingly that if he told me that he would have to shoot me!

He is a very good horse and I love horses that have been to the Festival and delivered the goods. You don’t have to worry about those types as you know what you are getting and with this horse there are no guessing games.

He has all the tools and if he was a 5-1 shot you would be delighted but as he is a 5-4 shot for the Ballymore many don’t want to know. From what we have seen he has been ultra-impressive and the form he showed when winning the Royal Bond at Fairyhouse in December has been fully advertised.

He had Darver Star four lengths back in third then and that horse has gone on to finish only half a length behind Honeysuckle in the Irish Champion Hurdle at Leopardstown at the beginning of this month.

I think he would take all the beating in the Ballymore and he has won his seven starts so far including the 2019 Champion Bumper."

Strong Suit
“He is unbeaten and his form stacks up including his Festival win.”

Weak Spot
“Why hasn’t he run since January? You always worry when you don’t see a horse running and he is also very short in the betting for the Ballymore.”