How does Mick see the unbeaten-over-fences Faugheen fairing on his fifth Festival trip? 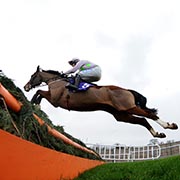 “This is a sentimental one but if FAUGHEEN were to win at Cheltenham it would be a reception to rival anything that I have seen at the Festival.

I had never heard a roar like when Danoli won, when Istabraq won his third Champion Hurdle, when Sprinter Sacre came back and won his second Champion Chase but Faugheen could well usurp all of them if he was win at the Festival.

For that reason we have to put him in as we would all like to see a great horse have his day again, whatever race they decide to go for. I was amazed by his performance when winning the Flogas Novices Chases at Leopardstown at the weekend but if I am being super critical, I don’t think he actually jumped all that well.

On face value the form isn’t good enough but sometimes you have to dare to dream and he just keeps on surprising and it would bring the roof down if he was to win his chosen engagement, whichever race that may be.”

Strong Suit
“He is already a two-time Cheltenham Festival winner, and a racing legend to boot.”

Weak Spot
“Age, injuries and we don’t know which race he will go for.”