The 2019 Albert Bartlett hero is prominent in the betting for the RSA. 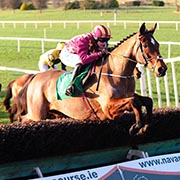 "MINELLA INDO would be the one for me in the RSA Chase. He won the Albert Bartlett Novices’ Hurdle last year and has to be respected.

We spoke to Henry De Bromhead live on Sky Sports Racing  the other day and he was very complimentary about Minella Indo and said that everything has gone to plan and that he is very happy with him.

The only blot is that he got beaten by Laurina at Gowran Park and she has kind of let the form down a little bit, but he then went onto win nicely at Navan in January. Perhaps importantly, who have to remember that this horse was beaten in two races last season prior to winning at the Festival.

He was beaten in a maiden hurdle at Limerick over Christmas and then was by Allaho in a novice at Clonmel. He then won at the Festival beating Commander Of Fleet in the Albert Bartlett and then for good measure turns around the form with Allaho in a Grade 1 at the Punchestown Festival.

He is a very good horse and there is no doubt that he finds his best form in the Spring. I think it’s a case of in Henry we trust as he’s delivered the goods in the past."

Strong Suit
“He won the Albert Barlett and backed up at the Punchestown Festival last season.”

Weak Spot
“His form this year doesn’t look good enough but he’s obviously a horse who comes good in the spring.”