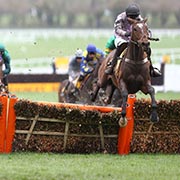 I am still keen on PENTLAND HILLS for the Champion Hurdle, but I was more keen on him when he was 12-1 rather than his current odds of 5-1.

He is a very strong traveller and I have been gutted with his performances this season especially the race at Haydock. I know Nicky was gutted as he felt that the horse was delivered perfectly to go and win by three or four lengths and then stopped and was caught on the line by Ballyandy in the Haydock Champion Hurdle Trial.

Maybe the ground was just too heavy for him, even though he appeared to handle it and I am hoping back at Cheltenham at a track that will suit him he will come back to his very best.

The Old Course doesn’t put as much a premium on stamina and he will arrive there to win his race at the last, it’s just a matter of whether he finds up the hill.

I am hoping back on better ground with a decent pace and decent horses to aim at that he will have a better chance. I am not giving up on him as he’s better than we have seen so far and he did win the Triumph Hurdle last year.

Strong Suit
“He is a strong traveller, a Triumph Hurdle winner and this track (Old Course) will suit him better.”

Weak Spot
“He looks a shoe in to be in the first three, but his price is shorter than it should be on what we have seen so far this season. ”

held up in rear, not fluent 4th, shaken up after 2 out, went 9th before last, no chance