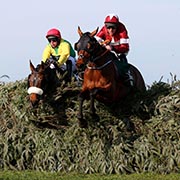 What is there not to like about Tiger Roll? He has won the Cross Country Chase for the past two years and his record at the Cheltenham Festival is unbelievable.

He has won a Triumph Hurdle, the National Hunt Chase and the Cross Country twice, last season the race by 22 length from Josies Order before going onto to win a second Grand National.

He is trying to win at the Festival for the fifth time and that is remarkable in itself. Watching him finishing fifth in his warm up race in the Boyne Hurdle at Navan on Sunday he appears to have retained all his zest and it looks like it all systems go for the Cross Country Chase.

It would be a brave man that would take him on in the Cross Country and you simply can’t ignore him.

If there are people looking for a lively outsider then Urgent De Gregaine could be one worth a second look.

Strong Suit
“He is a four-time Festival winner and as tough as they come.”

Weak Spot
“He is a short price for a race in which they have to negotiate an awful lot of obstacles.”