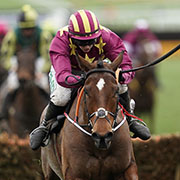 The Albert Bartlett can be such a brutal examination of a novice’s stamina, and especially on soft ground, so it can lead to surprise results like Minella Indo’s 50/1 success last season. Immediately prior to that, Kilbricken Storm’s 33/1 success in 2018 was a fourth winner in the last decade to be sent off at double carpet on top of 16/1, 14/1 and 11/1 shots prevailing.

Experience usually counts which is no better illustrated by the fact that although this is a race restricted to novices, six of the 15 winners had run over hurdles the previous season. The 2017 winner Penhill, didn’t fit that profile but he was vastly experienced from the flat where he ran 18 times so was battle hardened. He became only the second winner that had run on the flat and the other was in a non-thoroughbred race in France. It proved to be a different story last season however as the winner, third and fourth had only run twice over hurdles beforehand so that is something to monitor going forward whether that was a blip or the direction we are now moving towards.

Experience usually counts - six of the 15 winners had run over hurdles the previous season.

The Hyde, Bristol and Classic Novice Hurdles, all Grade 2 events run at Cheltenham at the November, December and late-January Meetings respectively, have featured nine of the 15 Albert Bartlett winners between them so previous Cheltenham experience has been a notable factor so far for the home team, especially as there have been five Irish-trained winners and it is rare for their best novice hurdlers to travel over from Ireland before the Festival. The best record of those races belongs to the Classic Novices’ Hurdle won by Harry Senior with four Albert Bartlett winners having contested that prize over 2m4½f so were appreciating the step up in trip.

Two years ago it was the ‘Bristol’ that was the key guide from Cheltenham earlier in the season as Kilbricken Storm won both races emulating Black Jack Ketchum, Nenuphar Collonges and Unowhatimeaharry. This season that Grade 2 in December was won by Redford Road who beat the penalised Champagne Well. The runner-up had previously filled the same position behind Thyme Hill in the ‘Hyde’.

Just about the most notable Irish guide has been the Nathaniel Lacy & Partners Solicitors Novice Hurdle at Leopardstown which was upgraded to a Grade 1 two years ago and bumped up in trip from 2m4f to 2m6f. This season’s winner, Latest Exhibition, beat the Gigginstown-owned Cobblers Way into second and the latter-named looks set to be the chief Gigginstown contender and they have won the Albert Bartlett twice and also supplied two seconds and a third. However, also respect the Grade 2 novices’ hurdle over 3m at Limerick over Christmas as Weapon’s Amnesty, Martello Tower and Penhill all won it en route Albert Bartlett success, which this season was won by Fury Road (beating Well Set up) who was then fourth behind Latest Exhibition at Leopardstown.

Willie Mullins had fired 25 bullets including three favourites without success until finally saddling his first Albert Bartlett winner three years ago with Penhill. His Allaho was third as a just a five-year-old last season and his main hope this season looks to be Monkfish.