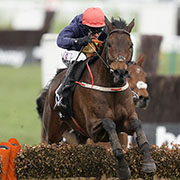 Of the four Grade 1 novice hurdles at the Festival, the Ballymore has been by far the most punter friendly with just three of the last 34 winners (Massini’s Maguire, Gaelstrom and Willoughby Court) being outside the first five in the betting. The market leader in particular has a very solid record winning on 11 occasions in the last 29 runnings. During the last 11 years, only six horses that did not start in the first four in the betting have finished in the first three so do not deviate too far away from the obvious.

City Island was giving the Irish their 21st Ballymore success since 1971 last season but, more pertinently, their ninth victory in what is now the last 14 years, with four of those via Willie Mullins (also saddled two runners-up in that time). A point worth taking on board with regards the non-Mullins Irish challenge is that winning Leopardstown form is a pre-requisite as their 11 winners between 1975-2006 had all won at Ireland’s premier jumping course as did their three most recent non-Mullins winners; First Lieutenant, Windsor Park and Samcro.

Their best guide has been the Chanelle Pharma Novice Hurdle won by Asterion Forlonge who seems more likely to head for the Supreme with the same owner set to be represented by The Big Getaway. Samcro took both races two seasons ago and prior to him Windsor Park won the Ballymore in 2015 after finishing second there and, going back further in time, Danoli, Istabraq and Hardy Eustace also either won or finished second in the Chanelle Pharma before taking this 2m5f prize. The other Irish guide to note is the Navan Novices’ Hurdle (Grade 2) over 2m4f in December which has featured a couple of Ballymore winners in the not so distant past and was won by Latest Exhibition from a subsequent Grade 2 winner in Andy Dufresne (not entered), but neither looks like contesting the race.

Regards the British guides, the Leamington Novices’ Hurdle at Warwick in mid-January won by Mossy Fen has been the best of late with No Refuge, The New One and Willoughby Court winning both races and Inglis Drever finished second in the Ballymore after winning this prize.

During the last 11 years, only six horses that did not start in the first four in the betting have finished in the first three so do not deviate too far away from the obvious.

Yorkhill had won the Grade 1 Tolworth Hurdle over 2m prior to his Ballymore success so was emulating French Holly and Monsignor who also won both races but this season’s winner,Fiddlerontheroof, is reported as being Supreme Novices’ Hurdle instead. The Classic Novices Hurdle at Cheltenham on Trials Day won by Harry Senior fromKing Roland has featured two fairly recent Ballymore winners (Massini’s Maguire and The New One), both of which were beaten in that trial and Monsignor completed the double in 2000. Black Op was second in both races two seasons ago. With regards to the Challow Hurdle (Grade 1 over 2m4f) won by Thyme Hill(thought more likely to run in the Albert Bartlett) all 16 winners to run in the Ballymore were beaten, though eight finished second or third - Champ being the latest last season.

A second negative trend that last season’s short-priced favourite failed to overcome was that he was a seven-year-old and now all 55 Ballymore runners aged 7+ beaten since French Holly in 1988 have been beaten and Ferdy Murphy’s winner remains the only winner aged over six from 100+ runners since 1974.

There are only two Grade 1 bumpers in Britain and Ireland combined and six of the last 21 Ballymore winners recorded a top-six finish in one or the other the previous spring. Six of the last nine winners started their career in an Irish point-to-point. Ticks for last season’s Champion Bumper winner, Envoi Allen, on both counts there.

Punters sent off Rite Of Passage and So Young as favourite (both finished third) on their pattern-race debut over timber in this race but only three winners in the last two decades, Galileo, Fiveforthree and City Island, managed to overcome their lack of experience to win the Ballymore having not contested a Graded race over hurdles before which is what The Big Breakaway and The Big Getaway have to overcome. I do prefer my staying novices to be more battle hardened at the highest level and, if they have already won a pattern race over hurdles like 15 of the last 22 winners, then all the better.

Eleven of the last 13 winners also won last time out and, over the last 36 years, only Massini’s Maguire failed to finish in the first two on his most recent outing. Curiously, all three of Nigel Twiston-Davies’ Ballymore winners were beaten on their previous start.

Positives
The Irish challenge, notably Willie Mullins
A top-six finish in a Grade 1 bumper
First or second in the Chanelle Pharma Hurdle
Pattern-race winners
Started career in an Irish point-to-point