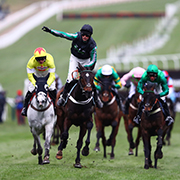 Altior running in the Champion Chase is as it should be for the x2 defending title holder with a place in history up for grabs. If emulating Badsworth Boy and becoming only the second x3 Champion Chase winner, that would be a greater legacy than winning at five Cheltenham Festivals if he was to have run in and won the Ryanair. Four or five, does it really matter unless you have won more than any other horse at the Festival? Hard to believe that he will get to six and emulate Quevega.

The best guide from the current season over a long period of time has been the Tingle Creek featuring 12 of the last 19 winners in which Defi Du Seuil beat Un De Sceaux. Seven weeks later he then put the 12yo in his place with so much more authority in the Clarence House Chase in the rematch. In the last seven seasons, Sprinter Sacre, Dodging Bullets, Sire de Grugy and Altior have completed the Tingle Creek-Clarence House-Champion Chase treble in the same season and Defi Du Seuil deserves to be favourite to make that five in the last eight.

In between Sandown and Ascot is the Desert Orchid Chase at Kempton. No superstars contested that Grade 2 race this season withBun Doran beating Duc Des Genievres and Sceau Royal (gave weight, ground and belted the last fence on soft going he doesn’t like) but it is worth noting that half of the last 14 subsequent Champion Chase winners had also won the Desert Orchid Chase.

The stats are very much in favour of last season’s Arkle winner, Duc Des Genievres, running a big race as 16 of the last 18 winners of the 2m novices’ championship from the previous year went on to finish in the first three in the following season’s Champion Chase (Footpad ran in the Ryanair and Douvan returned injured), of which as many as eight completed the double. Just a shame that the form isn’t! Virtually everywhere you look last season’s Arkle form has fallen flat on its face, not aided by four leading fancies missing last year’s race.

The Champion Chase has been a terrific race for the Irish since it was first run in 1959 winning on 22 occasions and it is also worth noting that on the last seven occasions when they have supplied the winner, they have also weighed in with the runner-up five times.

With 37 of the last 38 winners sent off at a SP of no bigger than 11/1 (and 17 of the last 20 could be found at no bigger than 5/1), this is not the race to go in search of that elusive big-priced winner. That’s some change around from when 14 consecutive favourites were beaten between Crisp (1971) right through to Badsworth Boy’s second victory in 1984.

If you believe that Un De Sceaux can win the Champion Chase crown at the age of 12, the stats are against him as only Moscow Flyer has won aged over ten since 1977. The only 12-year-old winner in the race’s history was Skymas in 1977.