Cross Country Chase | Class 2 | 5YO plus 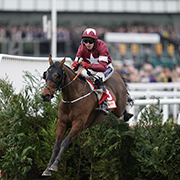 This will be the fifth running since it was upgraded to a conditions race from a handicap, so how relevant these race trends will be, we’ll need a few more years to find out. Theoretically, the leading fancies should hold an even better chance and, last year, Tiger Roll justified favouritism by as much as 22 lengths this becoming the first successful market leader for 12 years on the day. The 2016 favourite, Josies Orders, was promoted to first place a few months later following the disqualification of Any Currency.

Only Philip Hobbs has trained the winner for the home team in its 15 runnings so far (gulp) and it was two different French-trained horses that won over the course this season. In fact, it was a 1-2 for the French both times with Diesel D’Allier beating Urgent de Gregaine in November before Easysland (has since won at Pau) beat his stablemate, Amazing Comedy, in December despite getting low at a few obstacles.

The handicap that took place in December has been the stronger guide of the two having featured nine of the 15 winners, a good few improving plenty in March on what was their first sight of the course in December. Yanworth has that profile this time but he had an unfortunate experience as fell just as the race was getting going properly. The handicap in November (which has been run more often than not as a conditions chase) has featured three fewer winners at the Festival than the December handicap from one more staging.

Tiger Roll bids to become the first x3 winner of the race and go one better than Garde Champetre and Balthazar King who won it twice. All three clearly loved it around here and, although weights and measures still mean something in these races, it is not to anyway near the same extent as over park fences.

The handicap that took place in December has been the stronger guide of the two having featured nine of the 15 winners, a good few improving plenty in March on what was their first sight of the course in December.

Being a conditions race now though, do not be surprised if a name or two with a lofty handicap mark runs with no banks-race experience under Rules, though they will have schooled over the course. Might Bite could be the big name attempting that this season and two years ago it was The Last Samuri, and he was backed into favouritism and finished a highly-credible third given the poor record of course debutants over these fences down the years. That said, the 2015 winner, Rivage D’Or, became the only second horse to win on its banks debut over any cross-country chase in the last 46 races run over this course. Of the 59 races to have been run over this course, 35 winners had won or finished placed over these particular obstacles before.

J P McManus is chasing his seventh Cross Country Chase winner at the Festival (his first five were trained by Enda Bolger) and he looks to have the two biggest threats to Tiger Roll having purchased Easyland who remains in training with David Cotton and he also has Yanworth (Bolger) who has won over Punchestown’s banks course. The P.P. Hogan won by Neverushacon has thrown up three 1-2s and four winners in total from its 13 runnings but only one winner in the last 11 years. Neverushacon reversed form Yanworth from the Risk of Thunder over the same course in winning this season’s running.

Bolger has won 20 races over this course during his career but Gordon Elliott has won the last three editions of this race with Cause Of Causes (beating his stablemate Bless The Wings) and Tiger Roll (x2). Five of the last 11 winners contested last season’s race.

Only four horses aged under eight have won over theses fences from nearing 100 runners since the first cross country race was run at Cheltenham in 1991 but was one of those was Easysland back in December at the age of just five at the time so, all being well, he looks set to win plenty more times over these fences during his career.