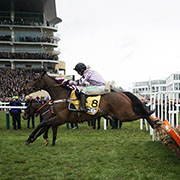 There can be no question that this is a different race now than before the introduction of the Boodles Juvenile Handicap Hurdle in 2005 so it is a case of concentrating on the stronger patterns since that handicap’s inception. Since the Boodles became part of the Festival, 12 of the 15 Triumph winners could be found in the first four in the betting.

Mr Adjudicator beat Farclas into second in the Spring Juvenile Hurdle two seasons ago and they went on to fight out the Triumph finish with the runner-up at Leopardstown reversing places for the stiffer test. In fact, five of the last eight Triumph winners contested that Grade 1 from last month, which could easily have six had the short-priced Triumph favourite last season, Sir Erec, not suffered a fatal early injury in last year’s race. Four of that successful quintet were beaten in that trial so supporters of Aspire Tower (looked the most likely winner until his last-flight fall) and the placed duo of Cerberus and Wolf Prince will still have their supporters.

Five of the last 20 Adonis Hurdle winners at Kempton then added the Triumph but the stronger British guide of late has been the Finesse Hurdle at Cheltenham on Trials Day but this season’s renewal looked very weak beforehand and the winner, Galahad Quest, is likely to be put away for the season with Nick Williams commenting that he is very much a long-term hope and possible Gold Cup prospect. Night Edition finished a close-up second. After struggling for a long time as a guide, in more recent years Katchit, Peace And Co and Defi Du Seuil added the Triumph to their Finesse success.

Five of the last 13 winners were officially top rated by the BHA of which three were not sent off favourite. An official rating of 140 is a pretty good cut off point.

Nicky Henderson is chasing an eighth Triumph winner following Pentland Hills’s 20/1 success last year plus he saddled the 1-2-3 in 2015, Paul Nicholls has won the Triumph twice, both with Flat breds and Alan King has saddled two winners, two seconds and two thirds in the last 12 runnings. However, the Irish have won four of the last seven runnings including a 1-2-3-4 in 2016 and 2018. They also supplied the second, third, fourth and fifth in between. Gordon Elliott has a superb record with his 4yos at the Festival having won both the Triumph and Fred Winter twice in recent years and also supplied two Triumph runners-up, Couer Sublime being the latest last season.

Five of the last 13 winners were officially top rated by the BHA of which three were not sent off favourite. An official rating of 140 is a pretty good cut off point. Regards ratings from the Flat, only the 67-Flat rated Spectroscope has won for horses rated lower than 80 in Britain or Ireland since 1996. Not all winners have run on the Flat as Katarino, Upgrade and Tiger Roll were sent straight over hurdles (the former had even run in a chase) and Soldatino and Defi Du Seuil started their careers in French bumpers, but if you fancy an ex-Flat horse, then make sure it has the right stamina credentials. Prior to Our Conor’s demolition job seven years ago, the previous 14 winners that had raced on the Flat had all run over at least 1m4f.

With Triumph winners embarking on their hurdling debut later in the season these days, this places a restriction on the amount of hurdling experience they are likely to amass meaning that more lightly-raced types over timber are winning on a regular basis. Pentland Hills only made his hurdling debut three weeks before the race last season and Zarkandar and Soldatino were having their first starts in Britain three weeks beforehand in the Adonis. If you had told me back before the 2008 running that four of the next eight winners would have won just once over timber beforehand then I would have struggled to take you seriously. Between 1993-2007 only one of the 14 winners had not won at least twice earlier in the season.

A fairly recent run is of importance as Zaynar’s absence of 55 days is the longest a Triumph winner has been off the course since Duke Of Monmouth defied a 78-day absence in 1992. French imports have won six of the last 11 runnings and French-breds have won five of those and also supplied nine of the last 16 win-and-placed horses in the last five years.