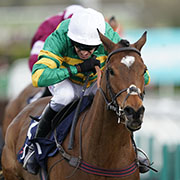 This will be the seventh running since its upgrade to Grade 1 status and the tenth all told. All winners since the upgrade bar Defi Du Seuil last season had run at the previous year’s meeting and class has certainly told as the last seven winners had won a pattern race over hurdles.

The first two years since the upgrade were dominated by horses to run well at the Festival before and then Vautour and Yorkhill were recording their second Festival victories when successful, a feat that the former Triumph Hurdle winner, Defi Du Seuil, then emulated last season. That stat may increase faith in supporters of the former Champion Hurdler,Faugheen, and former Ballymore winner, Samcro, if they are given the green light to run here.

Considering the Ryanair Novice Chase (Grade 1) at the Fairyhouse Easter Festival over the same distance is just around the corner in their own backyard and some of their better novices are held back for that, for the Irish to win seven of the first eight runnings is a notable achievement. They even posted a 1-2-3 in 2015.

Of the nine winners so far, seven won their previous race and six had contested a Grade 1 chase earlier in the season.

Willie Mullins has won four of those with Sir Des Champs, Vautour, Black Hercules and Yorkhill and he had a clutch of novices to choose from this season (Faugheen, Allaho, Easy Game for three plus Melon and Bapuame looked like they needed this trip when readily left behind in the Irish Arkle).

The two British-trained winners, Taquin Du Seuil and Defi Du Seuil, both ran in two novice chases at Cheltenham earlier in the season, notably the Dipper on New Year’s Day where they both finished runner-up. Midnight Shadow was booked for the same position this season until Champ’s heavy fall at the penultimate fence handing him that Grade 2 prize. Mister Fisher also has shown that he can handle Cheltenham when he won nicely at the December Meeting.

It was last season’s Dipper 1-2 of Lostintranslation and Defi Du Seuil that went on to fight out the finish of the Marsh, as was the case in the Grade 1 Scilly Isles Novices’ Chase in between, which this season was won in stylish fashion by Itchy Feet on just his second chase start when he beat Midnight Shadow. The Dipper and Scilly Isles should be the two pre-eminent British guides given their status and position in the racing calendar and that looks like being the case again this season.

Of the nine winners so far, seven won their previous race and six had contested a Grade 1 chase earlier in the season. Of the pair beaten on their previous start, Noble Prince was only defeated by a short-head and Black Hercules fell at the final fence when leading and in command so very much stick to an in-form novice.

If we stretch back to the 1989 Festival and concentrate on the now-four novice chases run up to three miles (the National Hunt Chase over 3m6f from now on is more of a stamina test which I believe is an advantage to older, more-experienced novices), there has been no winning novice over the age of eight.Faugheen is now aged 12 but, as argued in the RSA copy for the same horse, the ‘greats’ overcome trends, so for me it’s more a question of is a narrow defeat ofEasy Game  in the Flogas good enough?