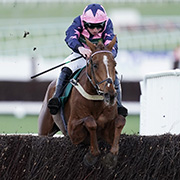 The National Hunt Chase has undergone more face lifts than Joan Collins since the turn of the century, the latest this season being a reduction in distance to just shy 3m6f from 4m (so two less fences), plus to qualify a horse must now have finished in the first four in a chase of over 2m7½f + and contested at least two chases and jockeys must have ridden at least five winners over fences from 20+ rides.

Even before these latest safety-first improvements, the trends were constantly changing so more emphasis should be placed on the most recent editions. What was once a glorified point-to-point is now to all intents and purposes a marathon Grade 1 novice chase, without that status. This is the fourth year that it will be run as a Grade 2.

Given the race changes, class has counted for plenty of late and an official rating of 145+ entering the race is required to win these days. Compare that to zero winners rated higher than 140 between 2000-2010. Four years ago Native River finished second to Minella Rocco and they went on to fill the places in the Gold Cup a year later before Colin Tizzard’s rugged stayer then won jump racing’s most cherished prize the following season. Five of the last nine winners had contested a Grade 1 novice chase earlier in the season (the 2018 winner had run in Grade 1s for his three previous races), though three winning favourites in the ten runnings since penalties were dispensed being won by the favourite is around par for the course.

Just two winners aged younger than seven since 1989 from 80 to try including four of the last six favourites; Foxrock, Very Wood, Southfield Royale and A Genie In Abottle, would suggest that we steer clear but six-year-olds were responsible for the 1-3-4 four years ago from just four representatives and Discorama all but won it last season. As for purely five-year-olds, they only receive 2lb unlike when last successful 43 years ago when they received 5lb. Copperhead is the leading six-year-old hope if sent here this season rather than the RSA.

Given the stamina demands of this race, being on an older horse is no negative unlike for the other novice chases at the Festival. Take 2018 for example when it was two second-season-chasing ten-year-olds that finished first and third. In addition, the 2014 winner, Midnight Prayer, was a nine-year-old and the 2010 and 2015 winners were second-season chasers that had contested the previous year’s Kim Muir. That’s now four winning second-season chasers in the last ten runnings despite being at a large numerical disadvantage.

That’s now four winning second-season chasers in the last ten runnings despite being at a large numerical disadvantage.

The best guide over the last decade has been the Neville Hotels Novice Chase (Grade 1) over 3m at Leopardstown over Christmas won Battleoverdoyen providing with a Gigginstown 1-2 in a tiny field, a race which has been contested by three of the last nine NH Chase winners. Gigginstown finally got their win three years ago having gone close a few times recently, notably when Tofino Bay and Four Commanders led over the final fence before finishing second and third respectively. Their Measureofmydreams also hit the frame in 2016.

Five of the last ten British-trained winners contested a novice chase at the Newbury Winter Festival at the end of November with a sixth having its final prep at the same course in February so Newbury form has been a notable factor of late. Danny Whizzbang took the Grade 2 novices’ chase at that meeting on his chase debut. After he was fourth in the Grade 1 Kauto Star, he then finished third in the Reynoldstown behind Copperhead and Two For Gold, a novice chase from which the winner or second has gone on to win two of the last four runnings of the National Hunt Chase.

Warwick form has also had an impact. The 1-2 in 2014 both won at the Midlands course on their previous outing and Alan King also ran his other National Hunt Chase winner, Old Benny, in a novice chase at the same venue two months before his Festival success. Two For Gold looked more of an National Hunt Chase than RSA possible when winning at the course in January.

Seven of the last 13 winners had experienced Cheltenham’s fences earlier in the season and three of that septet ran at the November Meeting, including Le Breuil last season under Jamie Codd who was riding the winner for the third time so he is one ahead of Patrick Mullins who will be trying to emulate him on the ante-post favourite, Carefully Selected.

Many punters tend to under-rate handicap chase form when analysing novice chases and it was the Munster National winner from five months earlier who came out on top three years ago. In addition, the 1-2-3 from 2015 had all run in handicap chases earlier in the season as had the runners-up for the previous two years that had also won a quality handicap chase. Two other placed horses in the last 14 years had finished placed in the Scottish, Irish and Welsh National between them.

Having won this race on six occasions, with five of those successes achieved since the race conditions were dramatically altered in 2002, Jonjo O’Neill will be many a punter’s idea of the first name to look for. Four of O’Neill’s National Hunt Chase winners were owned by McManus whose colours were also carried to victory by Bit Of A Skite. Also note Gordon Elliott who has trained three of the last nine winners and he gave all three a run at Prestbury Park over fences in the autumn.

Willie Mullins has trained two winners but that would very likely have been three but for Hedgehunter sprawling badly at the penultimate fence when cantering all over his rivals. Carefully Selected is his big hope for this season but he will need to eliminate the bad mistakes that he has made late on in two of his novice chase successes. Alan King’s entries are also worth a look with two winners in the last 12 years but Paul Nicholls is 0-18 of which ten started in the first five in the betting.

Other trends to note are that the last 17 winners had run at least three times over fences which was the sticking point against last season’s favourite, Ok Corral, and four of the last 13 winners arrived here very fresh having not run during the same calendar year.