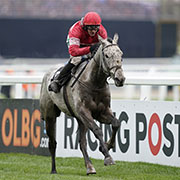 Since the JLT (now known as the Marsh) was made a Grade 1 thus diluting the quality of the other two Grade 1 novice chases at the Festival, Sprinter Sacre, Simonsig, Un De Sceaux, Douvan, Altior and Footpad have all won the Arkle having been heavily-punted odds-on favourites. That has massively contributed to last-time-out winners having won the last ten runnings and, following Duc Des Genevries last season, Willie Mullins is now chasing a fifth Arkle in six years with Cash Back his leading hope. Nicky Henderson has no obvious contender this season to win it for a sixth time unless the ground is deep enough to switch Mister Fisher from the Marsh Novices’ Chase.

The Western Warhorse miracle aside six years ago, the Arkle just doesn’t throw up shocks. Of the last 29 winners, 25 have started at no bigger than 11/1 with 16 of those being sent off as either the second, third or fourth favourite.

I usually strongly advocate that we concentrate on hurdles-race class in the Arkle but there aren’t any significant contenders in that respect this season (by that I mean BHA 160+ rated hurdlers as is usually the case) so I’ll brush over this angle to an extent this year except to say that eight winners stretching back to and including 2000 entered the Arkle as the best hurdler in the race on official ratings and three others were the second-top-rated-over-hurdles contenders in their year. Of the leading hopes, Global Citizen was the highest rated over timber on 156 ahead of Melon (155), Al Dancer (151), Brewin’upastorm (150) and Fakir D’Oudairies on 149. Cash Back and Notebook were only rated 141 and 135 over hurdles respectively.

There isn’t really a traditionally-strong key guide in Britain but two races have featured three Arkle winners in the last 15 years; the Henry VIII Novices’ Chase at Sandown won by Esprit Du Large and the Wayward Lad Novices’ Chase at Kempton won by Global Citizen.

With regards to the Irish, their Arkle Chase run at Leopardstown in February witnessed Notebookhold off a determined challenge from Cash Back. That race has historically been the best their best guide featuring ten of their last 12 Arkle Trophy winners. The Racing Post Novice Chase at Leopardstown’s Christmas Meeting was also won by Notebook beating Fakir D’Oudairies (will be 7lb worse off with no age allowance here) so Henry De Bromhead’s charge will be bidding to emulate Douvan and Footpad who won both races and then added the Arkle. That Grade 1 on Boxing Day is Ireland’s second-best guide having featured six of their last nine Irish-trained Arkle winners. Five of the last nine Irish-trained winners contested both those Grade 1 races over 2m1f at Leopardstown.

Eight winners stretching back to and including 2000 entered the Arkle as the best hurdler in the race on official ratings and three others were the second-top-rated-over-hurdles contenders in their year.

Cash Back only has ¾l to find with Notebookso there will be many arguing his odds are too big in relation to the favourite. I would temper that by arguing as there are two fences in the home straight on the New Course at Cheltenham as opposed to one at Leopardstown, that would favour the better jumper. Not that Cash Back isn’t good over a fence, he’s just not as scopey over one as Notebook is. There are also two extra fences to be taken in the Arkle (13) than the Irish Arkle (11) despite it being a furlong shorter in trip so the accent is placed even more so on jumping prowess than the Irish Arkle. Notebook is also a strong stayer at the trip and I expect him to enjoy the hill more of the pair so I think the difference in odds is about right.

The oldest Arkle winners are Sir Ken (1956) and Danish Flight (1998) at the age of nine. I am even loath to support an eight-year-old as only Moscow Flyer and Sizing Europe were so aged when they won the Arkle in the last quarter of a century and they had sheer class on their side winning 21 Grade 1 races between them including the following year’s Champion Chase so we are not talking standard eight-year-old Arkle winners here.

More pertinently for this season’s running on the age front are the five-year-old stats as Fakir D’Oudairies is to the fore in the market. His generation won on four occasions between 1998-2006 (and 14 times in total) when receiving 7lb and then 5lb but they are going the same way as the dodo in the Arkle in more recent years as just five have taken their chance in the ten runnings since their age allowance was dispensed with totally. Saint Calvados was their big hope two seasons ago and blew out big time.

Eighteen of the last 25 winners had contested at least three chase starts. Western Warhorse was providing the Pipe stable with a second Arkle winner who had raced just once over fences beforehand, the other being Well Chief. Four other winners going back to 1994 had just two runs over fences, which is what Global Citizen is attempting to overcome.

More of a negative for me that than is not having run since Christmas, or a week beforehand at Ascot, which is what Esprit Du Large, Put The Kettle On andBrewin’upastorm are attempting to do. If any of those can win then they will be recording the longest absence from racecourse action of an Arkle winner since 1963.

There looks like being plenty of pace on with Cash Back, Global Citizen, Put The Kettle On and Fakir D’Oudairies all likely to go forward. Un De Sceaux became the first winner to make all since Anaglogs Daugther in 1980 five years ago but Douvan virtually matched him having led from the third fence. Azertyuiop also led from the third fence when he was successful and Champleve led from half way.