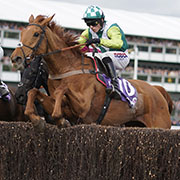 The standout novice hurdle guide to the RSA has been the previous season’s Albert Bartlett Novices’ Hurdle which has featured five of the last ten winners and that may well have been six had Boston Bob not fallen at the final fence in the RSA when holding a lead. The second and third in the 2018 RSA also contested the previous season’s Albert Bartlett.

Those are great stats for last season’s winner and third; Minella Indo and Allaho, especially as both were having just their third run over hurdles in the Albert Bartlett which has traditionally been a race for vastly-experienced novices, so they can be marked up further on those efforts, especially the 50/1 winner who was too keen for virtually the whole three miles but still just kept on galloping. Some effort, that.

Don Poli detonated three long-standing trends in victory five years ago. Firstly he was a six-year-old as just three RSA winners since 1978 have been aged under seven and the previous eight winners were all seven-year-olds. Allaho is this season’s leading six-year-old hope but it is worth remarking that the last two winners of that age were also trained by Willie Mullins; the aforementioned Don Poli and also Florida Pearl.

Secondly, he had run just twice over fences as the previous 15 winners had run 3+ times over the larger obstacles as had the following four seasons’ winners. In fact, Topofthegame was a second-season novice when he won last year. That might have just been the deciding factor as to why Santini was narrowly beaten having not got in that third crucial chase run due to having flu vaccinations enforced on him followed by a setback that almost ruled him out of the race. Just two chase runs would be against the pair who I trumped up from the Albert Bartlett; Minella Indo and Allaho.

The third trend that Don Poli overcame was not having had a prep race in the same calendar year but last season’s 1-2-3 were in same boat. Then again, Gordon Elliott has since commented that he thought that lack of prep cost Delta Work the race, hence why he has run him in between Christmas and Cheltenham this season ahead of his Gold Cup bid. Prior to Don Poli, all RSA winners since 1962 had run after the turn of the year, as did the three that immediately followed him.

Don Poli was also only the second winner since 1998 to be unbeaten over fences beforehand, Denman being the other. The four RSA winners since Don Poli had also been beaten at some point over fences beforehand. All but five of the last 26 favourites or joint-favourites were undefeated over fences heading into the race but that didn’t do the vast majority of them any good.

The standout novice hurdle guide to the RSA has been the previous season’s Albert Bartlett Novices’ Hurdle which has featured five of the last ten winners.

Faugheen won the best novice chase guide in Ireland when taking the Flogas Chase as four of the last 11 RSA winners contested that Grade 1 over 2m5f at Leopardstown. Last season’s winner bypassed the Festival altogether and it remains to be seen if Faugheen will contest the RSA.

Battleoverdoyen was beaten when he fell at the final fence having previously won the Neville Hotels Novice Chase beating Champagne Classic (likely to head for the NH Chase). Three of the last nine RSA winners finished in the first two in that Grade 1 at Leopardstown over Christmas. Two other recent winners of that race went onto win what is now the Marsh (Shattered Love) and NH Chase (Back In Focus) so it has been a very good overall Festival guide.

Willie Mullins has won the RSA Chase on four occasions with Florida Pearl, Rule Supreme, Cooldine and Don Poli but he has also saddled three runners-up and had as many as five others bang in contention in the closing stages who took falls (Al Boum Photo being the latest two years ago), notably Boston Bob who exited at the final fence when leading. He looks to have a choice between the 12-year-old, Faugheen, or Allaho who is half his age. Needless to say, 12-year-old novice chasers are rare but we’ve not had one quite like Faugheen!

His being 12 years of age doesn’t bother me. That you might find hard to believe for an author of 35 trends-based books! I took the view when horses like Kauto Star and Hurricane Fly were doing things that they shouldn’t be at their age that the ‘greats’ overcome all kinds of trends and with 11 Grade 1 wins and a personal best rating over hurdles of 174, Faugheen is worthy of that accolade and he may have won three Champion Hurdles had he stayed sound. Those injuries also mean that he is a lightly-raced 12yo and one that retains all his enthusiasm. It’s whether a narrow defeat of Easy Game in the Flogas is the bigger concern.

As for the British guides over fences, three of the last 11 winners finished first or second in the Grade 2 Reynoldstown Chase. Slate House beat Black Op into second in the Grade 1 Kauto Star Novices’ Chase. No winner has ever won the RSA but Coneygree would almost certainly have won it had he not been sent to (and won) the Gold Cup instead and given that Might Bite fell at the final fence in the Kauto Star when holding a long lead and then won the RSA, it is now rather a hollow trend that all 20 winners of the Kauto Star to run in the RSA were beaten. Many a placed horse in that Kempton Grade 1 has won an RSA though.

I am not a big fan of horses who have more than one season over hurdles, which brings us to Champ. Topofthegame won last season’s RSA having had more than one season over hurdles but before then and if we don’t include Lord Noelie’s sole run at the end of the 1998 season when well beaten on his racecourse debut and then put to grass, we had to go back 25 years to Rolling Ball to find the last RSA Chase winner that had spent two full seasons over hurdles except Might Bite. In other words, if you have a proper RSA hope, get it over fences sharpish. Of the last 26 winners, all but six were contesting novice hurdles last season.

We have to go back 18 years to Hussard Collonges to find the last winner to have started their career over fences over the RSA trip of around three miles. There is also the class element to take on board as the 14 winners up until Might Bite in 2017 had finished in the first three in a Grade 1 or 2 chase earlier in the season, and of course he was going to win a Grade 1 by a wide margin but for his last fence exit. The last horse to win the RSA Chase on his pattern-race chase debut was Looks Like Trouble in 1999 which is what Minella Indo is attempting to overcome.

Not taking too many chances in terms of a horse’s wellbeing is also a critical factor as the last 31 winners all finished in the first three last time out, hence why Henderson wanted to get a run into Champ after he fell in the Dipper. It’s unlikely that Elliott will for Battleoverdoyen though after he fell in the Flogas.

One last stat, French-breds have a better record in races over a shorter trip and the Festival so Irish or British-bred horses have won all but two of the last 26 runnings.