Registered As The Festival Trophy | Grade 1 | Class 1 | 5YO plus 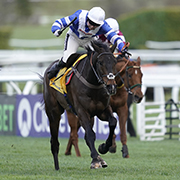 Thirteen of the 15 winners had won at Cheltenham before as had nine runners-up so previous course form is a big positive. Previous course winners have outnumbered their non Prestbury Park-winning rivals to the tune of 83-76 beforehand but that still doesn’t suggest that the record of previous course winners should be as dominant as is the case. The Ryanair takes place on the New Course which Frodon particularly enjoys being 5-7 here over fences.

The BetVictor Gold Cup (featured five winners) and Ascot Chase (featured four winners) are next best but it has been the Grade 1 race at Ascot rather than the Grade 3 handicap at Cheltenham that has the better record since the Ryanair was promoted to a Grade 1, not unexpectedly given its upgrade. Two of its winners doubled up here (Riverside Theatre and Cue Card) and two other winners (Albertas Run and Fondmort) finished placed at Ascot.

Thirteen of the 15 winners had won at Cheltenham before as had nine runners-up so previous course form is a big positive.

Checking out last year’s renewal has been productive as Albertas Run won back-to-back runnings and Fondmort and Our Vic went one place better than 12 months earlier so I wouldn’t put it beyond Frodon (fifth the previous season) emulating him having switched from the Gold Cup last year. That’s an angle to consider with Vautour doing likewise before he bolted up in the Ryanair.

Victory for Balko Des Flos finally gave Gigginstown the win that they wanted so badly in the race they effectively sponsor two seasons ago having had three seconds in the race in addition to the subsequent Gold Cup winner, Don Cossack, also placing and they could be double handed with Hardline and Road To Respect.

Balko Des Flos was returned at 8/1 so wasn’t one of the 11 winners in 15 runnings to be sent off in the first two in the betting. He also tracked the leaders before taking over three so I wouldn’t quite include him as one of 12 winners to race close to or right on the pace, with three of the last seven making virtually all the running, Frodon being the latest to do so last season.

When analysing patterns for the Ryanair, it is important to differentiate between the early trends when it was contested as a Grade 2 prize and results since it was elevated to Grade 1 status in 2008 as a different type of horse has been emerging on top. Prior to 2008, it was 2½ mile specialists just below top class that held the call but, following the upgrade, top notchers with high-quality form over 3m+ have taken over like in the last two years. Frodon had previously won the Cotswold Chase over 3m1½f and Balko Des Flos had previously finished second in the Savills Chase over 3m. Nine of the last 12 winners had already won a Grade 1 race and winners at the very highest level have recorded four 1-2s in the last nine years.

Irish-trained horses were 0-32 heading into the 2016 running but they put an end to that blip in style when Vautour led home a 1-2-3 beating Valseur Lido and Road To Riches and then Un De Sceaux gave the Irish back-to-back wins followed by Balko Des Flos completing a hat-trick for the raiders in 2018 leading home an Irish 1-2 with their only two runners. They had a mighty strong team last season too with Footpad, Monalee, Road To Respect and Un De Sceaux representing four of the first five in the betting but it proved to be home-trained 1-2 with Aso following home Frodon.