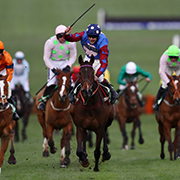 Backing the defending title holder, whose record reads 101211114 when they lined up the following season since 1998 or second-season hurdlers that have won on 15 other occasions during that time period, has been the way to go. Therefore horses in at least their third season over timber that didn’t win the Stayers’ Hurdle last season have a wretched winning record and this season they include If The Cap Fits, though this will be his first attempt at the race.

If you are looking back to last year’s Stayers’ Hurdle for inspiration, the last winner to run in the previous season’s renewal that failed to occupy one of the top two positions was Derring Rose back in 1981, and he finished third 12 months earlier.

With Penhill sidelined so unable to defend his title last season, it was Paisley Park that took his crown and now switches role from second-season hurdler to defending title holder. Regards second-season hurdlers generally, they supplied three 1-2s between 1990-1998 but we had to wait for 16 years until for the next occasion when the previous campaign’s novices fought out the finish and, for good measure they recorded a 1-2-3.

The Cleeve Hurdle has been the key guide since it was upped from 2m5f to 3m in 2005 so the only real difference between the two races now is that there is a penalty structure in place for the Cleeve as they are also both run on the New Course. Just under 50% of Stayers’ Hurdle winners and runners-up combined (12-26) have prepped in that trial in the last 13 years including last season’s 1-2, Paisley Park (1st) and Sam Spinner (4th) with five horses completing the Cleeve-Stayers’ Hurdle going back to and including 2008.

Numerically speaking, the best guide in the last 15 years has been the Long Distance Hurdle at Newbury where Paisley Park gave weight and a beating Thistlecrack on his seasonal return, though Inglis Drever and Big Buck’s, who won seven staying hurdle crowns between them, were responsible for the lion’s share.

Backing the defending title holder, whose record reads 101211114 when they lined up the following season since 1998 or second-season hurdlers that have won on 15 other occasions during that time period, has been the way to go.

Paisley Park justified favouritism in style in last season’s Stayers’ Hurdle so only two winners in the last 19 years failed to start in the first four in the betting; Cole Harden (14/1) and Penhill (12/1). It’s not just the winners that are well fancied either as half of the last 16 runnings have witnessed the first five in the betting provide the 1-2-3.

Cole Harden also became the first horse to even place that had tried to make all the running since 1996, let alone win it and, to top it off, he also defied the last-time-out stats having finished unplaced in his prep race whereas nine of the previous ten winners and three of the four subsequent winners had won last time out so he has very much been the exception to the rule.

Nichols Canyon’s success in 2017 was a much-needed victory for the Irish as, despite having won over one-third of the first 24 runnings since the Stayers’ Hurdle was first run at the Festival in 1972, just one win since Dorans Pride took the 1995 running had been an awful and surprising run. An Irish victory had to come sooner rather than later as they had not been short on runners-up; Alpha Des Obeaux, Annie Power, Limestone Lad, Bannow Bay, Le Coudray, Golden Cross and Voler La Vedette and, like waiting very patiently for a bus, the next winner followed quickly as Penhill and Supasundae fought out an all-Irish finish 12 months later. Faugheen fared best for the Irish last season in third and they will do very well to dethrone Paisley Park this time around too. Five of the last eight Irish-trained winners prepped in the Boyne Hurdle at Navan in February.

Faugheen ran his heart out at the age of 11 but the only Stayers’ Hurdle winner to be aged in double figures was Crimson Embers who caused a mini surprise at 12/1 when successful at the age of 11 in 1986, by 15 lengths no less. It was a very different race back then though taking 45 seconds longer to run over a longer trip and on the Old Course. The two greatest staying hurdlers that I’ve ever seen were Big Buck’s and Baracouda and both of them could only finish fifth in the Stayers’ Hurdle aged 11. They also raced behind the bridle as did the x3 winner, Inglis Drever, and Paisley Park was another to win with that trait last season. At the other end of the age scale, no five-year-old has won the Stayers’ Hurdle since it was introduced into the Festival.

In the past I have highlighted the fact that horses stepping up to 3m for the first time here, and especially those having contested the Champion Hurdle earlier in their career, had a poor record. That came to an end when the previously-unbeaten duo of More Of That and Annie Power emulated two very different horses in the firmly-established pair of Solwhit and Celestial Halo 12 months earlier by dominating the finish. Prior to Solwhit’s victory, the previous time a former runner in the Champion Hurdle won the Stayers’ Hurdle was Nomadic Way in 1992.

Just in case Apple’s Jade is sent to the Stayers’ Hurdle, we should also consider the record of mares and, as only relatively few have run in the race, I’d say that they have over-performed in general. Annie Power became the fourth mare since 1996 to fill the runner-up berth in 2014 following Naevog, Mysilv and Voler La Vedette. The two successful mares were Rose Ravine (1985) and Shuil Ar Aghaidh (1993).