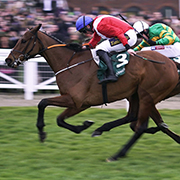 The race is limited to horses aged between four and six unlike the Grade 1 at Punchestown which is also restricted to amateur riders.

Willie Mullins is chasing a tenth win in the race. Of his previous nine winners it is worth taking on board that eight of those were five-year-olds with only Missed That being aged six, the same age as his ante-post favourite,Appreciate It, ever since winning at the Dublin Racing Festival.

None of his nine winners were aged four unlike his main hope last season, Blue Sari, who finished second. Patrick Mullins gets first choice on his father’s runners in this race but his record of picking the right one at Cheltenham can only be described as patchy at best though and the stable’s shortest-priced runner in four of the last five years did not fare best of their runners whereas the market has been a far better indicator as to their pecking order in the novice hurdles. Ferny Hollow looks set to the Mullins second string for last season's winning owner.

No one race stands out as an obvious guide but respect bumper form at the prestigious four-day Leopardstown Christmas Meeting as it has featured six Champion Bumper winners, though a couple of those were beaten at that fixture. More significant now perhaps is that since the Dublin Racing Festival came to be, it has provided both winners of the Champion Bumper as Relegate won the mares’ bumper at Leopardstown the previous month (won by Darling Daughter) before recording a 25/1 surprise here and Envoi Allen won the Grade 2 for colts and geldings, won this season by Appreciate It justifying 2/1 favouritism.

Of Mullins's previous nine winners it is worth taking on board that eight of those were five-year-olds with only Missed That being aged six, the same age as his ante-post favourite, Appreciate It.

Although bumpers are all about potential, it is worth noting that six of the last 17 winners were top rated by BHA (if including a mares’ allowance), including three of last five. One of those was Fayonagh who became the third successful mare and then Relegate made it four wins for mares in 2018 from very limited representation down the years. Official bumper ratings are not usually published but an exception is made for this race as they are used for the elimination process in the event of over 24 overnight declarations for balloting-out purposes. Last year’s winner, Envoi Allen, was second-top rated last season once the mares’ allowance had been added to The Glancing Queen’s rating.

Given the Mullins near domination of the Champion Bumper, the score is 20-7 in favour of the Irish, despite being responsible for around one third of the runners. It is bizarre that when one nation wins the race, they generally dominate the placings as well. The Irish had the 1-2-3 two seasons ago (or more to the point Willie Mullins did) and the 1-2-3-4-5-6 in 2014 and the Brits did likewise in 2003 plus the 1-2-3-4 in 2015. On five of the six occasions when the home team won they also supplied the runner-up.

The Pipe stable have won it twice down the years, Liberman for Martin and Moon Racer for David, and they look to have the two biggest live chances for the home team with Israel Champ and the recently-acquired four-year-old filly from Willie Mullins’s stable, Panic Attack, after she won so well at Market Rasen, so she will receive an eye-catching 15lb once her age and fillies’ allowance are both taken into account.

The last 16 winners all won on their previous start. In fact, only two of the 27 winners were beaten last time out, though last-time-out winners make up the lion’s share of the field these days. Once we have out last-time-out winner, do we then focus on unbeaten horses or doesn’t it really matter if our fancy had been beaten earlier in their career? In terms of winners, the score is 14-13 in favour of horses unbeaten horses in bumpers. Ten of the last 17 winners had run in at least three bumpers and, during that same period of time, six winners were rested having won before the New Year. A total of 21 of the 27 runnings have gone the way of Irish-bred horses.

The favourite came good last season after supplying as many as nine runner-up positions in the 22 runnings that preceded it. That said, as many as nine second-favourites have been successful so it has not been all doom and gloom for punters, far from it with 18 of the 27 winners sent off in the first six in the betting. The two biggest shocks were ironically recorded by two of the race’s best ever winners as Monsignor (50/1) and Cue Card (40/1) who went on to win at the Festival again.