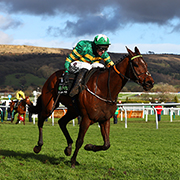 For any championship race at the Festival, revisiting the previous season’s renewal is the starting point for many and last season’s Champion Hurdle has featured nine of the last 20 winners which is a far better return than in the Gold Cup (five in the last 24 years). However, there will be a new name on the trophy this season with Espoir D’allen very sadly not recovering from a freak accident in the autumn and the 2017 and 2018 winner, Buveur D’Air, having incurred a serious splinter injury in the Fighting Fifth.

The runner-up for the last two years, Melon, looks set to remain novice chasing and as no unplaced horse from the previous year’s running has won for 26 years and a total of 23 of the last 35 winners finished in the first four at last season’s Festival, last season’s 80/1 third, Silver Streak, could be the each-way value again and fare best of the 2019 class, though Sharjah was brought down in the early stages so didn’t get a fair shot at the title.

Although Buveur D’Air is on the sidelines, Nicky Henderson and J P McManus could still supply the favourite in the Christmas Hurdle winner, Epatante. With as many as seven Champion Hurdles already banked, she is stabled at the perfect address of Seven Barrows for the race and her owner is also chasing an eighth Champion Hurdle. Winners of that prize at Kempton have generally struggled in the Champion Hurdle though as only Kribensis, Faugheen and Buveur D’Air have doubled up in the Champion Hurdle from the last 27 to try, though Epatante is taking the same route as Rock On Ruby (just beaten in the Christmas Hurdle) who also won the Gerry Feilden on his seasonal debut as a second-season hurdler.

If she can translate her flat-track form to Cheltenham then Epatante (or Honeysuckle if sent here rather than the Mares’ Hurdle) would become the fourth successful mare since 1984 following Dawn Run, Flakey Dove and Annie Power. Laurina wasn’t fast enough when well fancied last season but more of a question mark with Epatante is whether she is too fast and better suited to speed courses having flopped as favourite for the mares’ novices’ hurdle last March. She will receive a 7lb mares’ allowance which is 2lb more than the 1984 and 1994 winners received.

Nicky Henderson could also saddle the leading two juvenile hurdles of last season in Pentland Hills and Fusil Raffles, plus the International Hurdle winner, Call Me Lord. That Grade 2 race in December at Cheltenham that places more emphasis on stamina being run over half a furlong further, on the stiffer of the two courses and usually on more testing ground, also has an unremarkable record as far as winners doubling up in the Champion Hurdle. Beaten horses in the International Hurdle actually have a superior record to the winner in the Champion Hurdle (only Rooster Booster has won both races since Comedy Of Errors in 1974/75) so there is an argument that Ballyandy (2nd) and Pentland Hills (5th), who shaped liked the best horse until lack of a recent run kicked in, can reverse placings.

The Fighting Fifth in which Cornerstone Lad stole it to an extent from a lame Buveur D’Air with Silver Streak back in third has been a good pointer of late.

Of course, Pentland Hills and Fusil Raffles are now five-year-olds and just two of those have won since 1985, so once in a generation. Some will also argue they were also poor Champion Hurdles, in overall quality in respect of Katchit and the race totally falling apart on the day in the case of Espoir D’allen. Not including last year’s runaway winner, six other five-year-olds have hit the frame from 29 runners in the last 13 runnings.

Since Sea Pigeon won at the age of 11 in 1981, Royal Gait, Rooster Booster and Hurricane Fly have won at the age of nine but when a contender reaches the age of ten for any of the championship races at Cheltenham then we should start to get twitchy and only two horses have won aged 10+ in Champion Hurdle history and, significantly, they were defending title holders.

At present, Saldier is the shortest-priced, Irish-trained contender to give them a fifteenth Champion Hurdle going back to 1998 after winning the Morgiana Hurdle.

Last season’s Supreme winner,Klassical Dream has disappointed so far this season but Sublimity (4th), Jezki (3rd) and Buveur D’Air (3rd) have come on from that contest to win the Champion Hurdle on the corresponding day 12 months later in the last 12 years. In addition, Hors la Loi III, Brave Inca and Binocular contested the Supreme in an earlier season before winning the Champion Hurdle. I dare say that the brilliant Golden Cygnet may have completed the Supreme-Champion Hurdle double had he not suffered a fatal fall two starts later or maybe Browne’s Gazette would have won had he not whipped round at the start or Douvan or Altior would have been triumphant had they not been sent down the chasing route and won the Arkle instead (likewise Vautour and the JLT) but the record books tell us that the last Supreme winner to win the Champion Hurdle the following season was as far back as Bula in 1970/71.

The Ballymore won by City Island is actually superior to Supreme winners in the Champion Hurdle, possibly because they don’t go an all-out gallop in that 2m5f contest whereas that is more likely over 2m so the winner has to show a burst of speed to win it more often than not but he didn’t receive an entry.

The Kingwell Hurdle is ideally positioned 3½ weeks away from the Champion Hurdle for connections to put the final touches to their preparations and was the final prep-race for Hors La Loi III, Katchit and Punjabi since 2002 and Kribensis and Alderbrook during the 1990s. It is now starting to fall out of fashion though.

Faugheen took the 2015 Champion Hurdle and in doing so he became just the second horse since Granville Again in 1993 to do so having not run in a recognised trial since the turn of the year. Epatante looks like she will try to emulate him with no plans to run her in a trial after her victory on Boxing Day.